Curses, Fates & Soul Mates is still on the charts! Do you have yours yet? If not, hurry! The 99c sale ends soon! Get your copy now at:

Last week, I gave a little tease of Frostbite by Lynn Rush, part of the CF&SM bundle. Today, how about a tease from Cursed by R.K. Ryals, another goodie in the box set. 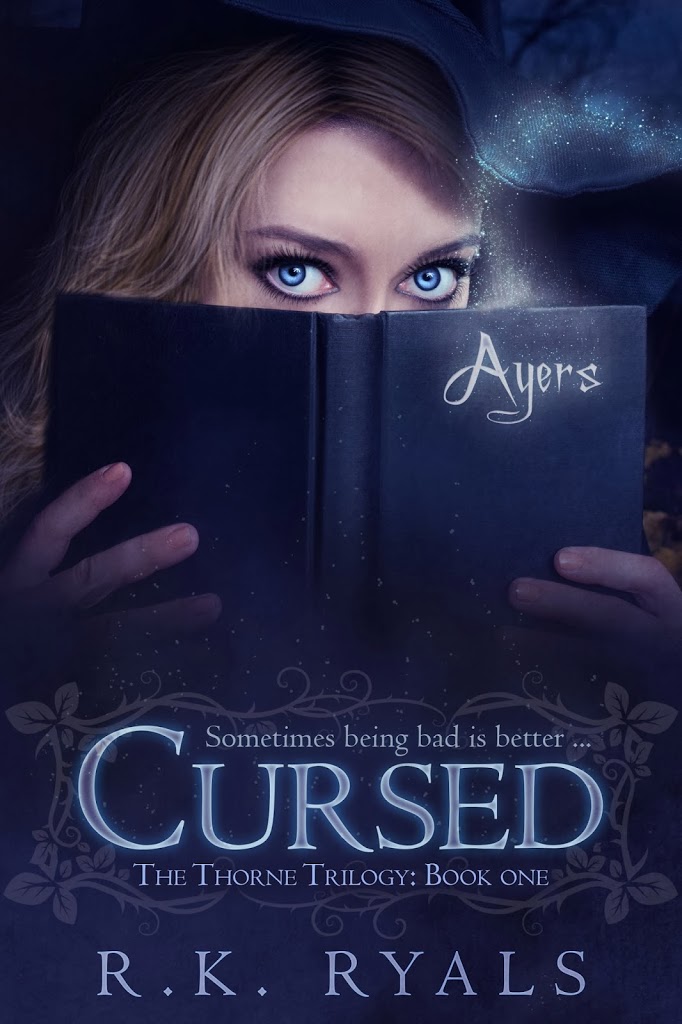 Book 1 in The Thorne Trilogy

A grimoire. A witch. A Demon. Ellie Elizabeth Jacobs, often known as Monroe due to her fascination with vintage attire and old movies, is an 18 year-old witch and a darned good one! But there is also something very wrong with her. Demonic energy makes her powers stronger, she has the ability to ward off Demons, and Lucifer wants her. Sometimes being bad is better. Or at least that’s how Luther “Thorne” Craig feels. The hybrid Demon son of the cursed Cain and the Demon Lilith, Luther is reluctantly sent to New Orleans, Louisiana by his brother, the hybrid Demon ruler of the Outer Levels of Hell, to protect Monroe from Lucifer’s searching Hellhounds. But what happens when things go wrong? In this riveting spin off from R.K. Ryals’ Redemption series, Monroe is faced with an old grimoire, an ancient curse, and a journey to discover a family secret that may surprise them all.

Luther watched me, his eyes searching before finally pushing away from the wall. I took a deep breath.
“I want an amulet,” he ordered.
I stared at him. “Excuse me?”
He looked amused. “I’m pretty sure I didn’t stutter.”
There was a bad movie joke there, and I was prepared to make one, but one look at the Demon’s eyes and I knew it wasn’t a good idea.
“Why?” I asked instead.
Luther leaned in again. “I wonder if you know how appealing you are, Ms. Jacobs. Your blood is hard to resist. So, let’s make a trade. You give me an amulet, and I’ll promise not to kill you. Got it?”
I gasped. I knew the sons of Lilith and Cain craved blood. They were like the mythical vampires with the exception that they didn’t need blood to survive. They just liked it.
“I’m not afraid,” I whispered.
“The amulet,” Luther insisted.
His green eyes suddenly shone red, and I looked away again, pulling a piece of twine away from my neck. I pulled it over my head, cursing myself for my weakness. I did fear him, but I was stronger than that. My instincts were telling me to give him the necklace, and I trusted my instincts.
As soon as the quartz touched Luther’s palm, he winced before pulling the makeshift amulet over his head. It landed against his black t-shirt.
“I appreciate that,” he said wryly, before leaning so that both his hands trapped me against the door. “You’re a strong one, Witch. I can feel it.”
One moment, his red eyes watched me, the next his lips were pressed brutally against mine. It was painful, it was brief, and it sent shivers all the way down to my toes.
He pulled away. “For the amulet,” he said wickedly.
And with that, he disappeared.