With the chaotic summer I had and Power‘s release, it’s been way too long since I’ve had a Writer Wednesday feature. But today I have one! We’re welcoming back Heather McCorkle who’s celebrating the release of the final book in her Channeler series, Rise of a Rector.

The final novel in Heather McCorkle’s Channeler series, Rise of a Rector, has released! To celebrate, and in the spirit of October, Fane from the channeler series is here to tell us about a scary moment in his life. Take it away Fane!

Fane: My cousin, my only flesh and blood anywhere near my age, was being attacked by two boys in the middle of a party. No one was helping her. I crouched in the shadows, indecisive. If I helped her then I risked exposing my family’s secret, one that would endanger all our lives if the people of this town knew. But the boys were overcoming her. I couldn’t let them hurt her so I swallowed my fear and jumped in the fight. 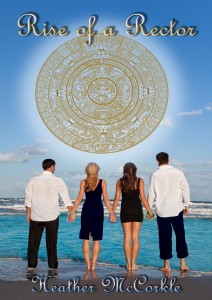 Check out Heather’s blog for a new tour stop each day until November 2nd. To thank her fans, and future fans, Heather’s historical fantasy novel (a standalone novel that ties into the channeler series) will be free Friday November 2nd and Saturday November 3rd on Amazon. And if Heather gets over 1000 downloads of To Ride A Puca in those two days she’ll give away a $10 Amazon or B&N gift card! So spread the word, get ready to download To Ride A Puca, tell all your friends to download it, and drop by Heather’s blog now to enter to win the gift certificate.

You can find all three novels in the channeler series (The Secret of Spruce Knoll, Channeler’s Choice, and Rise of a Rector) on Amazon and B&N, as well as other retail sites. The channeler novella~and prequel to The Secret of Spruce Knoll~Born of Fire is currently free on Amazon and B&N and you can find a short story about Fane from the series in the FREE anthology, In His eyes. You can add Rise of a Rector to your Goodreads lists at this link.

One Response to Writer Wednesday – Heather McCorkle & Rise of a Rector