In August, I hosted the awesome and lovely Brenda Pandos for her EVERBLUE tour. Today, I have the honor of welcoming her back for my first Writer Wednesday post. Every Wednesday, I’ll be featuring a writer, hopefully introducing you to some new authors and books that I know you’ll love.

Brenda allowed me to interview her, but first, a little about her:

Brenda Pandos is mommy/computer whisperer by day and writer by night who lives in California with her husband and two energetic children. Shortly after the birth of her second son, Brenda’s oldest was diagnosed with an autism spectrum disorder that turned her world upside-down. Her life became round the clock feedings with a newborn and a daily stream of tutors working to help her son. She craved a meaningful escape.
The main concepts of THE TALISMAN SERIES came to her in the wee hours of the morning as she reminisced the good old days when she lived with her best friend in the Santa Cruz Mountains. As a young girl, Brenda was a hopeless romantic, constantly lost in a fantasy world in her backyard of knights on white horses, mermaids and evil villains. As a teen, shows such as Buffy the Vampire Slayer, Angel, and Interview with a Vampire intrigued her. With the encouragement of a friend after writing one chapter, she continued on to complete her first manuscript.
Brenda has three novels published and is currently working on the third book in the series, The Onyx Talisman. You can follow her journey at http://brendapandos.blogspot.com 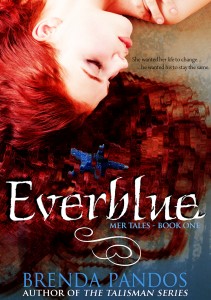 And about her most recent release, EVERBLUE:
Best friends share everything with each other. Or do they? Seventeen-year-old Ashlyn Frances Lanski is tired of her boring, single life. Spending time with her best friend Tatiana, dreaming about kissing Tatiana’s twin brother Fin, and swimming competitively are her only sanctuary. The girls plan to leave their drab lakeside town far behind for college. But when Tatchi fails to return home after a family emergency, and no one knows where the family has gone, Ash chooses to do something drastic to find them.

Ashlyn is about to discover what she&#x2019;d thought to be true her whole life, wasn&#x2019;t, and the truth, too fantastical to imagine. Secrets lurk beneath the deep blue waters of Lake Tahoe, secrets that will change Ashlyn’s life forever.

Now onto our interview!

Have questions for Brenda? Go ahead and ask!