Today is my birthday! It’s also the 3 year anniversary since publishing my very first book, Promise (the 1.0 edition). At that time, it was a let’s-give-it-our-all-and-see-what-happens kind of thing. We really had no idea where things would go from there. I had my dreams, but I was also realistic. If I only wrote for myself and friends and family, I was okay with that.

I surely didn’t know we’d be re-releasing Promise and Purpose a year later and that they would take off on the bestsellers lists. I also didn’t know that I’d have five more titles out (with another on its way) plus four audiobooks by this time. Or that I’d have so many readers in the UK that I’d do a signing tour there! Or that I’d have over a half-million downloads of my books and over a quarter-million copies sold! That just BLOWS. MY. MIND. And it’s all because of YOU – readers, writers, bloggers, friends and family!

THANK YOU A HALF-MILLION TIMES OVER!!!!
(and then some)

So today I not only celebrate my birthday, but I also celebrate the anniversary of making my dreams come true. I can’t wait to see what this next year holds! Oh, and it’s come to my attention that I’ve announced the release date of Wrath everywhere except here on the blog. OOOPS! How did that happen???

Besides my birthday and publishing anniversary, today is also the wedding anniversary of Alexis and Tristan! Yes, it was all kind of planned out that way. *grin*

So here’s a little teaser from Wrath that seems appropriate for the day:

“It’s a full moon and you brought me to the woods?” I asked Tristan. “Do you think this is a good idea?”
He gave me a wicked smirk as he swaggered toward me. His hands grasped my waist and pulled me toward him to close the remaining distance between us.
He leaned over and nibbled on my ear lobe before whispering, “A little danger could add to the fun.”
And I must have needed him badly—worse than I realized—because my body immediately began throbbing with an ache for him.
He pulled back and began undressing himself, his beautiful hazel eyes never leaving my face. He pulled off his boots and then his pants and stood in front of me in all of his glorious nakedness. Oh, my. How was I so lucky? After giving me a nice eyeful, he turned and strode toward the stream, the muscles of his round, too-perfect-to-be-real butt moving in a way that made my throat dry. I couldn’t help but imagine biting it.
“Are you coming?” he asked me as he stepped into the water.
Sheesh. One touch from him and I would be. 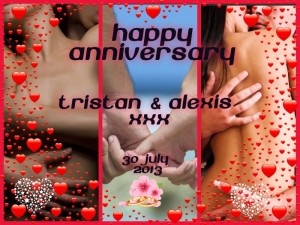