Release Day! The Space Beyond is LIVE!

Hearts break, souls shatter, love lies in The Space Beyond…

As members of the Phoenix, Jeric and Leni are thrust into their new lives, expected to lead Earth’s Guardians. But Leni struggles with trusting her own soul, and Jeric is more concerned about keeping Leni safe than meeting others’ demands. When Darkness swarms Lake Haven, they embark on their first mission with little preparation and no idea which soul the Dark hunts.

Born and raised in Lake Haven, Bex hopes to escape her small-town life, ideally in the arms of her soul mate. She knows he exists, and her heart aches with the need to find him. When her long-lost mama calls to announce she’s knockin’ on death’s door, Bex reluctantly makes the trip to see the uncaring bitch (bless her heart), only to be knocked off her feet by the sexy and charming Dr. Mason Hayes. Is he really The One?

Leni’s soul felt an instant connection to Bex, but if Bex found her soul mate, she isn’t their mission. So who is, and why does Leni instinctively feel drawn to her? Can Leni even trust her intuition? And will Jeric step up and lead when the time comes or continue to hold them back?

If they don’t learn to trust themselves and each other quickly, Darkness will claim them all…along with the rest of Earth’s souls.

Other books in the series:

The Space Between
Part One in the Book of Phoenix
Author: Kristie Cook

When life falls to pieces, answers lie in The Space Between…

Leni Drago can’t make a smart decision on her own, according to her mother anyway–the few times she’s tried resulted in disaster. When her uncle sends her on a dance tour in Italy to find her real self, she returns to an empty home and any evidence of his existence wiped out. Then things get even stranger, like the mysterious appearances of Jeric Winters–inked, pierced and a hit-’em-and-quit-’em type. He’s one decision that should be easy for Leni. Or is he?

Jeric doesn’t do girlfriends. Unless they’re someone else’s. He left the fighting cage and modeling for a reason, and girls who want more than a night of fun are distractions he doesn’t need. Especially when they come with as much baggage as Leni carries. But he can’t shake the gut feeling that he needs to know her. All of her.

To discover the truth behind their connection and their ties to a journal from 1989, they must face painful secrets from their pasts. And they must do so quickly because their own existences are falling to pieces.

This first part of The Book of Phoenix takes you on a heart-wrenching ride as you discover the answers that lie in The Space Between. 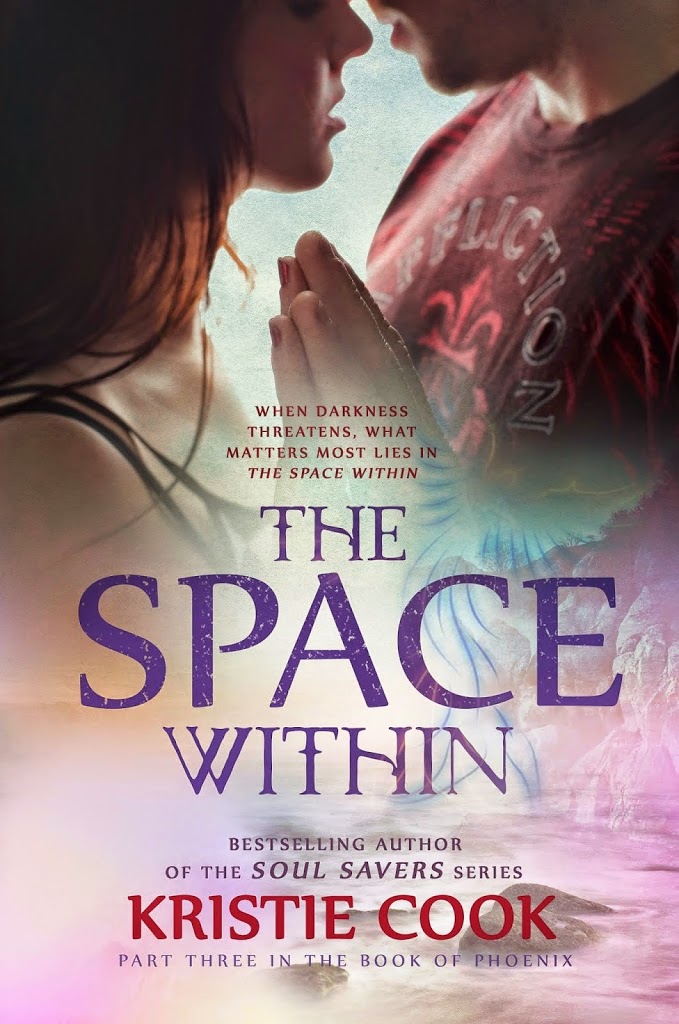 When Darkness threatens, what matters most lies in The Space Within…
Completing a mission that reunites Guardian Twin Flames turns devastating when the Book of Phoenix throws Leni and Brock into a Dark world, leaving Jeric and Asia behind. They count on their other halves to rescue them, but when that doesn’t happen, they must fight through the Darkness and find a Gate that will take them home.

Except all of Earth’s Gates are sealed.

Enyxa, ruler of Darkness, and her horde of Dark souls storm the Gates to push their way through to Earth. While Leni and Brock fight Enyxa on their side, Jeric and Asia must figure out how to save their Twin Flames without jeopardizing all of Earth’s souls. Through it all—and with a little help from Enyxa—Brock and Asia begin questioning their relationship and whether they’re truly meant to be together…or if they’re two Lost souls forced to become one.

If the Broken dyads don’t find each other fast, they’ll be lost to the Dark forever. But to reunite means choosing themselves over all of Earth’s souls. Can Jeric make that decision? And will Brock and Asia find the love they both desperately crave? Or are they all doomed to perpetual Darkness?

Discover how it all ends in The Space Within, the explosive conclusion to The Book of Phoenix trilogy.

Kristie Cook is a lifelong, award-winning writer in various genres, from marketing communications to fantasy fiction. She continues to write the Soul Savers Series, a New Adult paranormal romance / contemporary fantasy, with Promise, Purpose, Devotion, Power, and the latest release, Wrath, book five, available now. She’s also written a companion novella, Genesis: A Soul Savers Novella, which details the compelling history of her Soul Savers mythology. Over 300,000 Soul Savers books have been sold, with Promise peaking at #54 on the Amazon Top 100 Paid list and at #1 in the Amazon Fantasy category.

Kristie’s second series, The Book of Phoenix, is a New Adult paranormal trilogy. The Space Between is currently available, and The Space Beyond is releasing May 19, 2014, andThe Space Within will be available Summer 2014.

Besides writing, Kristie enjoys reading, cooking, traveling, and riding on the back of a motorcycle. She has lived in ten states, but currently calls Southwest Florida home with her husband, three sons, a beagle, and a puggle. She can be found at:

Posted in Uncategorized | Tagged celebrating, Facebook Party, Release Day, The Book of Phoenix, The Space Beyond

3 Responses to Release Day! The Space Beyond is LIVE!