Foodie Friday: In the Kitchen With Jordan and Eris from GENESIS

Since we’re celebrating the release of Genesis: A Soul Savers Novella this month, I thought we’d spend the next few Foodie Fridays exploring food and cooking of the place and time period – Greece around 200 B.C. Today, Jordan, one of the main characters, and Eris, his, uh-

“My bitch,” Jordan says. Eris rolls her dark eyes. I blink at him. With shoulder-length blond hair, deep blue eyes and a body a Spartan would salivate over, he’s hot. “What? She’s not really my wife. We don’t even believe in marriage. As if I’d ever marry her.”

“Um,” I stammer. Yeah, he’s hot, but also arrogant and intimidating. “It’s just…Well, that’s quite a modern way of putting it.”

“You brought us here, out of the book and our time and into your kitchen with all of its ridiculous tools. What is this?” He accidentally hits the button on the tool he’s holding and blades whir. He grins. “Oh, a torture device!”

I yank the cord from the wall and snatch it out of his hand before he truly hurts someone. “It’s an immersible blender.”

Eris eyes the tool. “That could be useful for potion making.”

“I suppose it could be,” I say, “but let’s talk about food. It’s Foodie Friday and I’d like to share a recipe from your time with my followers.”

“We don’t have recipes from our time,” Eris says with a sniff. “Chefs didn’t exactly record a video as they cooked. The best you get are guidelines and lists of ingredients. In our time, trained chefs didn’t need to be told exactly how to prepare food. They used their knowledge, experience and imagination.”

I decide not to argue with her about how today’s chefs do the same but, since they are able, are kind enough to share with others. After all, Eris fights dirty and could set my feet on fire with a twitch of her hand.

“All sorts of dishes.” She says nothing more.

I sigh and before I realize it’s coming out of my mouth, I say, “Well, I can just ask Cassandra. She’ll be more cooperative.”

Eris growls and my cabinets and refrigerator doors are suddenly flying open and slamming shut. Jordan slams a hand on her shoulder, quieting her.

He snorts as he looks at me. “Cassandra would be a waste of time. Her cooking lacked sophistication. She prepared boring dishes like chickpea soup. Or roasted a rabbit or a mullet over the fire, handed you a chunk of coarse bread and called it a meal. As if that’s a meal!”

“It’s how you were both raised,” I remind him.

“She could have done better. Occasionally she’d add some extra herbs and spices if she found an overgrowth of them, but usually she kept those to herself, claiming she needed them for her healing concoctions. When I started going into the villages and discovered festivals and all the great foods served to men, I learned how good food can really be. Even Eris cooked better than Cassandra.”

I peek at Eris. She seems to have calmed down and I try to get on her good side. “So what is Jordan’s favorite meal you make? I think he really likes that one stew…”

She smirks. “The one he spewed all over the table?”

Jordan opens his mouth, but I cut in. “That had nothing to do with the food. I think he likes your cooking even more than he’ll admit.”

He narrows his eyes at Eris, then grunts as he says, “You, at least, can flash great distances and bring back some interesting ingredients.”

“That’s true,” Eris says. “The Greeks of our time didn’t use foods such as potatoes, tomatoes, rice or certain spices, because they came from far-off lands and hadn’t been introduced yet. But I sometimes brought them home with me for new flavors.”

“Too bad you couldn’t make your potions taste better, too,” Jordan says. “Just the smell of them makes me retch!”

Eris’s eyes flash. I speak up. “So back to the stew. Show me how you made it.”

“I just took whatever I had available and threw it together.” She rattles off a list of food that she might have on hand, a list that is amazingly similar to this one. So we select some items off the list, take a trip to the grocery store – which is a story in itself, as you can imagine – and Eris and I make Jordan’s favorite stew.

Here’s how we did it and since I’m not much of a measurer myself, I’m following tradition and just giving some guidelines. 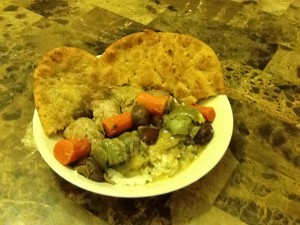 Eris and women of the time used clay pots for cooking, so she was delighted to find that I had one – you might know it as a crockpot. We crocked the pork roast, artichokes, carrots, oregano, thyme and garlic until everything was tender (I bought the wine later in the afternoon, otherwise we probably would have added some, too). We sauteed the leeks and more garlic in olive oil, then added the artichokes and carrots, then the pork, red wine and seasonings to taste. We brought it to a boil and let it simmer for about ten minutes, then stirred in the goat cheese until it melted, added the olives and cooked just a few minutes longer. We served it over rice, which Eris would have brought from one of her trips to the Far East.

Jordan scoffed at the fork I offered, tore off some warmed naan and flat bread and dug in, scooping up food with his bread, as was customary then. He grunted with satisfaction.

Was it the best thing I ever made? Um…no (please don’t tell Eris!). Was it good? Yes. Was it fun to make? Absolutely! It’s been a long time since I’ve had this much fun shopping and cooking. But I think next time I’ll invite Cassandra and Niko. They’re much more pleasant company.

So, seriously, I found a list of foods the Ancient Greeks ate and thought it’d be fun to try to create something on my own. It was a lot of fun. Are you up for an adventure? If so, I dare you to check out this list of ingredients and create something new. Then let me know how it turned out and if you’ll be making it again.

One Response to Foodie Friday: In the Kitchen With Jordan and Eris from GENESIS