A Secret About THE SECRET OF SPRUCE KNOLL 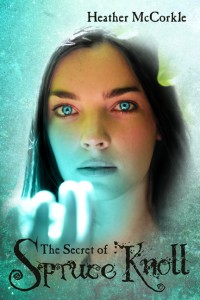 It’s hard enough being a teenager under normal circumstances; imagine being orphaned, sent to live with an unfamiliar aunt—and learning that there really is magic in the world. Following the tragic death of her parents, Eren Donovan moves to Spruce Knoll to live with her aunt. Little does Eren know the entire town of Spruce Knoll is filled with “channelers”—a magical group of people who immigrated to the small Colorado town when they were driven out of their own lands.

Channelers are tied to the fate of the world. As the world slowly dies, so do they—and they alone have the power to stop the destruction of Earth. Now, Eren learns she not only lives among them, but she is one. When she meets local boy Aiden, his charm convinces her that being a channeler may not be all bad.

As Eren and Aiden’s relationship blooms, so too does a mystery in Spruce Knoll. The town holds many secrets—and many enemies. It soon becomes apparent that the untimely death of Eren’s parents-and Aidens-was no accident and that her life might be in danger, too. Only time will tell if Eren has the power to protect the people she has come to love.

On each stop of her tour, Heather is revealing a secret about herself, her book and her writing. So what’s my secret question? Before you read it, you might want to check this out so you get a good visual of Aiden (*swoon*). But don’t forget to come back to see the secret here and find out how to win some fabulous prizes.
My secret question:
What is a secret thought Aiden has about Eren?
Directly from Aiden:
There’s this light inside Eren that has nothing to do with her power. It’s all about her kind, giving nature and the way she puts others before herself. Sure she’s wicked hot but that’s just icing on an amazing package.
Heather’s offering frawesome (freakin’ awesome) prize packs for her tour. You get an extra entry for being my follower and commenting here. There are lots of other ways to enter, too, so go do it. You want this book. Trust me.

7 Responses to A Secret About THE SECRET OF SPRUCE KNOLL